When I was first searching for The New Men on Amazon by entering its title and “Enfield,” the first hit was usually a t-shirt with the slogan “I Left My Heart in Enfield, NH.”

Thus far, with significant struggle, I have managed to resist buying that t-shirt for novelty purposes or making a custom variation on it for dirty joke purposes. The good news is that resisting such purchases has just gotten easier.

“Why?” you no doubt ask, suddenly seized with the sense of that something important is afoot.

Well, because that search now is pretty likely to generate The New Men as its first hit.

“OMFG, AND WHY IS THAT?” you inevitably ask, scarcely able to breathe given the suspense.

Brace yourself: because the paperback is now available on Amazon.

So go buy a mizillion copies, y’all. I have to get my fish tank pimp shoes out of hock somehow. And, given that the paperback has been in the penalty box for so long, it’s currently getting outsold by The Charles Lindbergh Guide to Child Protection and Talmudic Interpretation.

The novel is also signed up for Kindle MatchBook, which means that if you buy the paperback on Amazon, you can get a deeply discounted Kindle edition for you own use (apparently giving the Kindle version as a gift to somebody else isn’t yet possible).  The prices will probably vary occasionally, but as I type this the Kindle edition is normally priced at $7.99 but only $1.99 via MatchBook.

So, in theory The New Men is out in paperback.

In reality, the printer is currently trying to sort out what’s causing this:

Yep, the blotched italic ds have made their return. They’re like strange insects from an unknown land, appearing and disappearing without pattern or explanation. And for obvious reasons, the publisher isn’t going to list the paperback as available until we’re sure they’re gone for good.

Ugh. It’s been a few days. It might be a few more. But, fingers crosse•, it’ll all be sorte• out soon.

In the meantime, might I suggest something in one of our lovely shades of ebook?

But I just got my hard copy proof of The New Men.

Pretty damn exciting! I mean, except for the fact that the lower-case italic ds are all oval-ish blotches.

Anyway, this means the paperback will be available for purchase soon. And possibly that Wayzgoose Press and I will be breaking new ground by replacing d (played out, amirite?) with a bleeding-edge symbol–as, of course, befits all historical fiction. 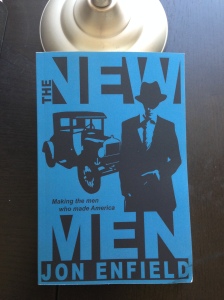